Posted by KFouss on December 20, 2012
Sometimes I wonder what these kids are thinking.

Today was a kinda crazy day with two assemblies. The freshmen/seniors went to the Holiday assembly first period and my 29-student precalc class was down to 11. (Because the performers had to go too.) The sophomores/juniors went 6th period, which cut that class from 19 to 3. Tomorrow is Grandparents' Day, so anyone with a grandparent attending (or presenting to grandparents) will be gone 2nd - 5th.

I told the precalc kids at the beginning of the week that they had two quizzes to do either today or tomorrow depending on what day they're here (or one each day if they're here both days). One was our weekly Algebra Review quiz and one was a solving triangles quiz using Law of Sines/Cosines.

Everything was fine. Kids who were here 1st period chose a quiz to complete (look how nice I am - I let them pick which one to do!). During my next class, one of the boys from first period stopped in asking if he could miss class tomorrow.  One of the social studies teachers is skyping with some soldiers in Afghanistan, which is awesome. I told him that was fine and asked when he was going to take his quizzes and he got a blank look on his face. Oh. Quizzes?  He left saying he'd ask another teacher if he could miss their class instead.

One of my freshmen told me in the middle of their solving systems quiz that she just couldn't get the graphs right. She just kept trying and erasing and trying again. I don't know if she was angling for some help, but I just told her to put something down... something's better than nothing!  It was a weird situation.

After school a girl stopped in.  She's not one to go out of her way to do math (actually, she tells me quite often how much she hates math and doesn't want to do it... and yes, this is a precalculus student) so I was somewhat surprised to see her here. But then when she started out by saying, "I know you said you wouldn't give us extra points, but. . ." I knew what she was after. She was concerned that her grade wasn't where she wanted it to be and asked if I would give her something to get more points. I told her that's what I've been doing this whole quarter. I also told her very nicely that if she was concerned about getting ready for the exam I'd be more than happy to go over stuff with her or look at old tests/quizzes to help clear things up, but I wouldn't be giving her anything for points.  (A friend of hers who I also have in class was standing in the doorway encouraging her to get help by going over mistakes. Bonus points for that one!) The girl walked out of my room without another word.  I don't think I won her "Favorite Teacher" vote with that one. 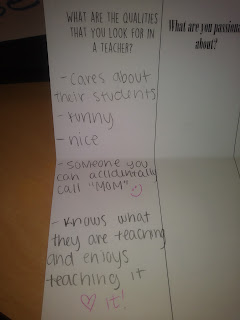 Back to the beginning

I was chatting with a friend at my daughter's volleyball game yesterday about my first day of school today.  She made an interesting comment about how only teachers count their years of experience. I guess I'd never thought about it, but we have such a clear-cut beginning and end to our jobs that we definitely do keep track. Mostly.

Today was the first day of my 21st year as a teacher. Which makes me feel old and tired just thinking about it.  It also made me think back to my first year when I was a baby at 21 teaching kids just a few years younger. It shocked me a few months into the year when a student recognized the outfit I was wearing as one I'd worn the first day. Boy, those kids remember everything!  (Maybe not the math, but the personal stuff for sure!)

And every year feels like a fresh start. In what other profession do you have the chance to re-invent yourself every year?

Here were my first day activities:
1. Names. How do you pronounce it?  What do you like to b… 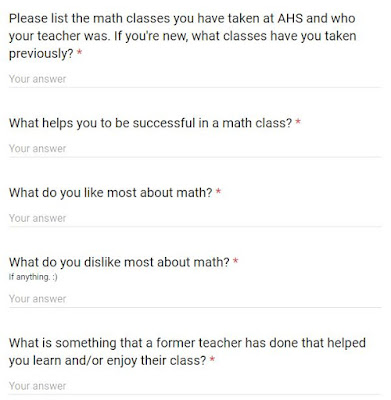 I just spent an hour or so revamping my beginning of the year student survey.

For the most part it's the same. I do it via a google form because I love having a spreadsheet of their answers! So I ask the basics - name, grade, class, parent name and email, previous math classes, etc. I also ask what some of their thoughts on math are:

This year I added a part 2.  Using FormMule (a google sheet add-on), I'm sending an automated email to their parent once the student submits the form.  Just a nice little welcome. The cool thing is that using FormMule, I can customize the email a bit. It will enter both the student's name and class where indicated.

Here's the email the parent will receive:

You'll see at the bottom of the email a link to a Parent Survey for them to fill out if they'd like to give me more information about their son/daughter.

I'm finding that as my own kids grow up (my son will be in 8th grade this year!) I appreciate all of the information I can… 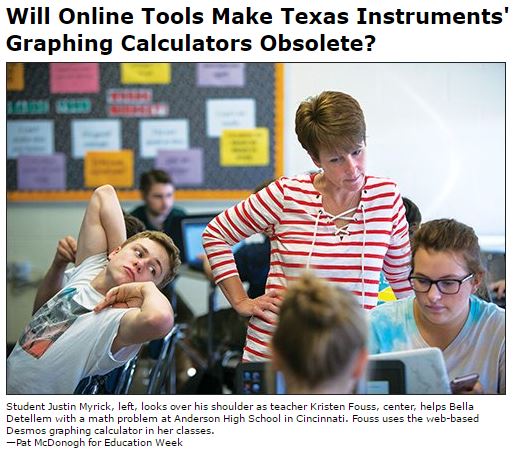 I woke up to a parent email the other day.

Not only is it summer right now (so I don't have any students), but this was the parent of a student I'd had in class two years ago.  This parent happened to be reading Education Week and ran across an article that I was interviewed for a few weeks before school was out.

(Did you think that non-teacher parents read that? I didn't.)

I was flattered that they thought to send the link to me, especially since the author had promised to but hadn't yet (she did later that afternoon).

And not only was I mentioned often in the article, but my picture was on the top!  Crazy.

Here's the link to the full article.