Posted by KFouss on June 28, 2012
I admit that I haven't done a whole lot of thinking about school lately. I've been having a lot of fun with my kids and have had a nice relaxing week this week while they're at my mom's (ahh....).

Amongst my twitter friends I seem to be in the minority.

@approx_normal sent some queries out in search of some classroom pictures.   She claims to be looking for new ideas for her room, but I think she's just being nosy. :)  As it's summer I didn't have any pictures, but I just made a trip to school (in search of some new furniture for my room that was available) and took some.  I  hate to show these now because it's not how my room will look once school started, but if you're interested, here's the summer version of my room! The view from the door.  My desk is back in that corner - I just moved it there at the end of the school year.  Still trying to figure out if I'll like it back there!  (I had it up front in the corner so I could sit on it and see over everyone during class.) From the back.  Does everyone have the "What if the world were..." posters? From the side.  The folders on the chalkboard are where I put make-up assignments for absent students (which helps avoid the "did I miss anything yesterday?" questions).  I'm thinking of trying to make at least some of that area into something resembling a bulletin board by putting some fabric on it to get some more color!  @druinok just posted some pictures on her blog of her room and a fabric bulletin board that looks so cute!  I'll just need to find a good way to adhere it.

I just realized I never posted pictures of the A that I painted on the wall the last day of school!

So that's it for my room. Check out @approx_normal's post for other people's rooms if you want some ideas!  (I love @mr_stadel's groups of desks.  I may give that a shot this year if I can get an arrangement that I like.)

In some other news school-related, we got an email last week that said we now have a new principal!  I've been at my current school for 12 years and have had the same principal for (I think) the last 10. She's now moving on to a district job and they've hired a former math teacher-turned assistant principal from an area school.  You gotta love the "former math teacher" part of it, but there's always that uncertainty when you get a new boss.  I've only heard good things about him so far (a good friend was on the interview committee and was really impressed with him) so I've got my fingers crossed!

And lastly....
Last night @tbanks1906 sent out a very interesting tweet:  What is 1 thing you plan to START doing in your class, CONTINUE doing and STOP doing this year?

I want to address this in a future blog post (so start thinking about your answers!) but for now I'm going to list some things I'd written down at the end of the school year to remember for next year: 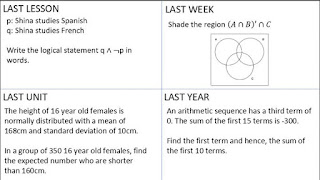